Switching gears now - making a big life decision can be overwhelming, but there might be a better way to think through a hard decision than just staring at a list of pros and cons. Meghan Keane of NPR's Life Kit explains.

MEGHAN KEANE, BYLINE: 2020 brought a lot of change, and that means people are facing a lot of big decisions this year.

RUTH CHANG: The pandemic has definitely wrought some big changes in our society. I think it's a great opportunity to think about how to think.

KEANE: That's Ruth Chang. She's a philosopher and professor of jurisprudence at Oxford University. And one of Chang's research areas is decision-making. Chang says when it comes to facing a decision, you first need to clarify, are you making a big choice or a hard choice? Because there's a difference. Getting a life-saving operation, Chang says, is a big but an easy decision. But a hard choice...

CHANG: The sad truth about hard choices is that the choice is hard because one option isn't better than the other.

KEANE: To Chang, a truly hard decision means having two alternatives that are on a par with one another.

KEANE: How did you know that lumberjack was my backup career, Ruth?

KEANE: Now, with two options, you'll want to make that classic pros and cons list. That'll help you assess what factors are really important to you. Wearing flannel to work is great, but that goes in the pro column for both lumberjack and journalist, clearly, so I'm right back where I started. Chang says most people get stuck at the pros and cons stage and suggests running a quick test.

CHANG: I call it the small improvement test.

KEANE: Say you've been offered two jobs, one on the West Coast and another on the East Coast. There are pluses and minuses to both. So how do you choose? Imagine if you could improve one of the options.

CHANG: OK, guess what? We're going to raise the salary of your West Coast job by a thousand dollars a year.

CHANG: It's better than it was before, but it doesn't seal the deal. It doesn't make that improved job now better than the East Coast job.

KEANE: If improving one option just a little bit doesn't provide a clear winner, then, Chang says, you're in a certified hard decision. That leads up to the next step - the heart of Chang's process. And it requires some mental and emotional courage. You have to open yourself up to the possibility of making a commitment.

CHANG: And when you do that, you finally remake yourself into - or realize yourself as someone who has committed to the career on the West Coast or to lumberjack-hood. And you make yourself into someone for whom it is now true that you have most reason to do that instead of the other thing.

KEANE: The key is to ask yourself not what is the right choice, but who can you commit to being?

CHANG: So this is why hard choices are important - because they're like junctures in our life where we get to realize ourselves as one kind of agent as opposed to another, someone who has most reason to do this thing instead of that thing. And it's up to us. That's what's so scary about them.

KEANE: Scary, but also exciting. So the next time you're faced with a hard decision, don't stress about what path is best. Instead, think about it as an opportunity to be the author of your own life. 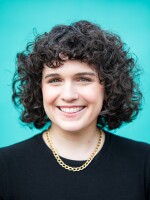 Meghan Keane
Meghan Keane is the founder and managing producer for NPR's Life Kit, which brings listeners advice and actionable information about personal finances, health, parenting, relationships and more. She is responsible for the editorial vision of Life Kit, which aims to serve NPR's larger mission of public service.
See stories by Meghan Keane